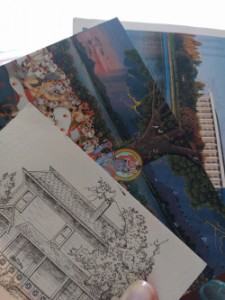 Three postcards arrived on the same day. I smiled as I dug them out of my mailbox.

I had a momentary respite from the overwhelming news and noise online as I read the three postcards, and they made me smile. I read them one by one, while sitting in my car before pulling out of the driveway. A postcard from Weston, Missouri; one from Portland, Oregon; and one from Canberra, on the other side of the world. Hand-written notes with personal messages. A human touch. 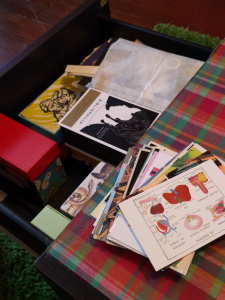 That night I ordered more postcards, not that I needed more, and I ordered a fountain pen.

Recently I’d become a bit obsessed with fountain pens and wanted a “starter pen,” and the Lamy Safari fit the bill. Then I posted on my Facebook page, letting my 1,000+ “friends” know that I was ready to start writing, ready to break in my fountain pen and send new postcards out into this old world.

More than 50 people contacted me over Facebook to request an old-fashioned, hand-written postcard. So I spent my weekend breaking in my new pen and postcards. Most of the cards will scatter around the United States. One will go to the United Kingdom. Another is headed to France. One will make its way to The Netherlands.

I like picturing people around the world, briefly forgetting the news they read online, the overflowing in-boxes, the unmanageable “to-do” lists. 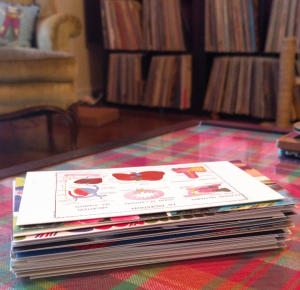 And maybe a few recipients will feel inspired to pass it along, sending more postcards to other networks of online contacts. Human hands putting pens to paper, which will get passed through hand after hand, around the world, until the moment when the recipient holds the hand-written thoughts between two fingers.

People around the world reach into their mailboxes and pull out brief, intimate messages, and they smile, at least for a flicker of a moment.