When I was 22, I received a letter from Brian.

Finding this letter a few months ago was like finding a piece of my heart that I could hold in my hand and closely examine.

Brian wasn’t much of a letter writer back in 1993, which makes this old piece of paper filled with his handwriting even more valuable to me. “Thanks a lot for being so persistent in writing to me, it truly is appreciated,” he wrote. “You’ve forced me to set aside my inhibitions when it comes to corresponding.”

He died much, much, much too young. But even back in ’93, as he was about to turn 25 years old, his old spirit showed through the ink. In his own words, Brian was feeling extremely agoraphobic and spent most of the time reading and writing at his “station”, a spot at the kitchen table.

He was, however, excited about his upcoming birthday. He wrote, “I asked my father for a basketball so I can answer that age-old question … can I dunk?”

And he was excited about the upcoming morel season because, according to Brian, “Morels are by far the best tasting mushrooms of the kingdom.”

Inside the envelope, Brian included three blank postcards of the painting he made for William Burroughs in 1991. 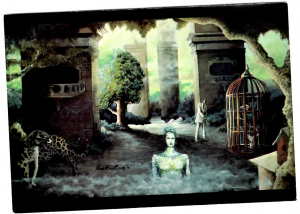 As I recall, Brian painted a dream Burroughs described to him. 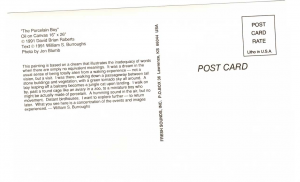 Perhaps this is the last letter he wrote me because near the end he says, “I really dislike writing letters, so, if you could write to me and enclose your phone number, it would be much easier for me to communicate with you.”

Eventually I moved back to Lawrence, Kansas, and I saw Brian not long after his 30th birthday. And then, his funeral. Brian died in 1998.

Years after Brian died, I’d occasionally see him walking past. I’d stop and turn, and realize he wasn’t there, or I’d caught a stranger, who looked nothing like him, out of the corner of my eye.

I like to think Brian is still around, and to me he is, especially when I look at his handwriting and hear his voice, and I remember his melancholy eyes that looked right into you.