In mid-February, I relocated from Austin, TX, to Raleigh, NC. On March 2, I started a new position in my company, and went from working alone from my apartment in Texas, to working in a downtown Raleigh office as part of a team. And this required things like slacks, blouses, and general grooming so I could be seen in public.

At first, it was all rather awkward. A shock to my system, to be honest. I remember telling a friend that I felt like a grown up all the sudden, wearing big girl clothes to an office. I told him that I was even considering getting chairs for my kitchen table (a 1950s-era Formica-topped hand-me-down from my grandfather, may he rest in peace). My friend thought it was strange that I’d raised an 18-year-old, and wearing slacks to an office job was the thing that finally made me feel like an adult. “Any moron can have a baby,” I pointed out. Wearing slacks, on the other hand, was a thing I’d put off as long as possible.

So I started my awesome new job and pretty much got my ass kicked for two months. I work for a company that doesn’t just throw you into the deep end. They also throw you the supplies to make a boat, only they don’t tell you what the boat should look like or provide instructions or a screwdriver, and usually a piece or two is missing so you’ll have to whittle that part on your own… and good luck finding a pocket knife for the whittling. We’re talking steep learning curve, and you’ll need a good sense of humor, patience, and gumption. I went in early, left late, and not much else through March and April.

And I wrote postcards. And people wrote back.

As I settled into my new town and new job, I found myself feeling a bit isolated. Other than one new friend (met through a work friend), the only people I’ve met are colleagues and people I pay to spend time with me (my trainer, stylist, and a couple of bartenders named Doug). I’m not exaggerating.

To say I felt lonely isn’t quite true. I don’t believe in being lonely or bored.

I’m surrounded by and connected to people. I love working on a highly productive, friendly, energetic team, and I’ve quickly adapted to office life. I’ve had a couple of trips that allowed me to reconnect to people outside of work, I’ve enjoyed exploring my new town on weekends, and I’ve stayed in touch with longtime friends online. And through postcards.

When I started Diction Fairy last summer, I didn’t know I’d be moving half way across the country or starting a new job. I thought rekindling my love for snail mail was about nostalgia. I dug through piles of old love letters and messages sent from friends in the 1980s. I reminisced, shared, and motivated others to pick up pens and buy stamps.

We are connected all day, every day, yet we still aren’t connecting. I miss the tactile.

I remember watching my daughter’s appreciation for books as she grew up. Occasionally she’d gently stroke the pages of a hardback as she read it. I understood. I feel that affection for a good story, much like I feel it for a brief sentiment hand-written on the back of a postcard.

In the quiet of my new apartment in a new city in a new state, I’ve written to and heard from friends who are celebrating graduations and weddings. I’ve exchanged hand-written correspondence with friends who are struggling with family illnesses and deaths. I’ve received postcards from vacations, and sent them from business trips. I’ve clutched a well-timed note from a friend to my chest with tears in my eyes, and I’ve laughed out loud from a snarky P.S. 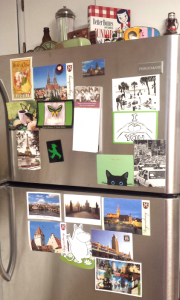 And as the postcards rolled in, my refrigerator turned into a frame. 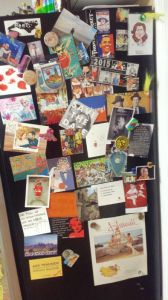 And I never felt lonely or bored.