One of my former roommates moved from Lawrence, Kansas, to Seattle in 1990. She mailed me a 3-page letter that November, and decorated the envelope with a boot photo cut from a magazine.

Back then stamps were 25 cents, which is a good thing when you’re bringing in $800 a month and hoping to start saving money. 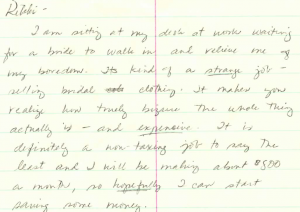 From her vantage point as a sales clerk in a bridal boutique, my friend says, “It’s kind of a strange job – selling bridal clothing. It makes you realize how truly bizarre the whole thing is – and expensive.” When each of us got married years later, we skipped the trips to bridal boutiques and each opted for low-budget, non-traditional weddings and receptions. Still, the “whole thing” is truly bizarre.

She also talks about the weather in Seattle and how dark the winters are, but not as UNBEARABLE (emphasis hers) as Kansas winters. “That is something you won’t have to be worrying about since you are moving to Austin, right?” In fact, I moved to Austin a few weeks later, the first week of January 1991, at the ripe old age of 20. And the UNBEARABLE Kansas weather played no small role in my decision to move south.

“I can’t even begin to tell you how different it feels once you move,” she writes. “It’s nice to get away from all the gossip and pettiness of small town living and actually meet people whom you know nothing about – who they slept with, what bands they were in, where they work, etc. ”

Yes, it is nice. Extremely.