I took an unexpected hiatus from blogging because of an unscheduled car wreck,

followed by a bit of business travel. (Obviously I survived the wreck, and injuries weren’t as bad as I expected… especially considering I EXPECTED TO DIE.)

Then I had business travel, which left no time for bloggery. I’d planned to mail a bunch of postcards during my travels, but you can’t find a damn international stamp anywhere they sell postcards. Seriously, I tried in several countries and it simply cannot be done. If only there were an app for that…

Back in the USA, I was pleasantly surprised to have new FUN mail when I got home, which helped take the sting off the nasty post-car-wreck mail that also filled the box. 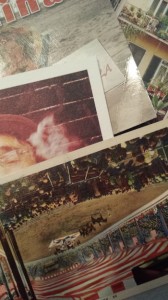 Hopefully now I can get back in a groove of sending (and receiving) the fun mail, because you know the unfun stuff never ever stops arriving.