Lack of time, not lack of travel, resulted in a sadly neglected blog.

In December a companion and I road tripped in my new Mazda 3 (named Dorothy Parker) from Austin through Oklahoma; to Kansas for a brief stay in Lawrence; on to Missouri, where we spent two nights at The Elms Hotel; then a couple of nights in Arkansas, where we stayed at The Crescent Hotel in Eureka Springs; a night in Shreveport, Louisiana; and back to Austin for a few lazy days at home to ring in the New Year. On January 2nd, we road tripped through an ice storm to Alpine, Texas, where we spent one day walking around a frozen, darling little town without electricity or gas. The next day, with power and gas pumps back online, we cruised through Big Bend for a few hours, and back to Austin. 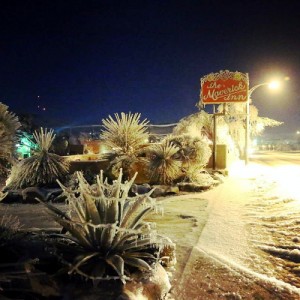 And yes, I bought many postcards along the way. I mailed none of them.

After I returned to Austin, I frantically started packing my apartment for a February 11th move to the East coast. And a few days later, I flew to Raleigh for the weekend to find an apartment, and then right back to Austin, where I stopped packing boxes and starting packing a couple of suitcases for a 2.5 week business trip to Europe. 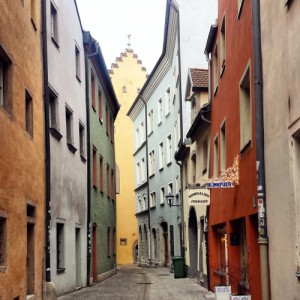 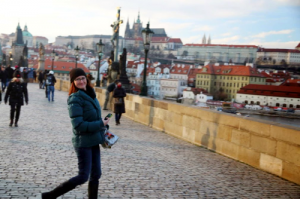 On February 11th, I rented a 22′ Penske truck and car trailer, and threw  the rest of my possessions into boxes that two movers quickly hurled onto the truck, and I started fulfilling my life-long fantasy of driving a big rig. With a friend and my two faithful-not felines (navigating and meowing, respectively), I drove east, stopping for a night in Marshall, Texas, at a vanilla La Quinta. The next night, after a long day of driving, we stopped in Athens, Georgia, where we stayed at perhaps the most adorable motel ever, The Graduate. (Seriously, go there, and then you can thank me later.) 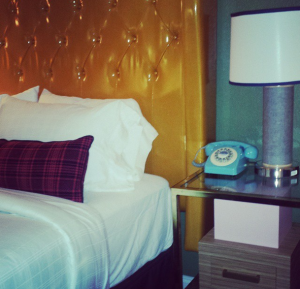 On Friday, February 13th, we pulled into Raleigh. Yes! I tempted the Fates once again. With the help of a couple of movers, I spent Valentine’s Day unloading the truck. To be honest, I watched the movers unload the truck, but by that point, I was pretty exhausted. Whipped. Punchy. Downright hysterical.

Heck, re-reading the events of the past couple of months makes me need a nap.

And then I started unpacking … only to pack a suitcase on Wednesday night for a quick business trip to L.A. starting Thursday morning. And that, my friends, is why I’m writing this postcardy post from thousands of feet in the air in the not-too-horribly-uncomfortable seat of a Delta plane (with people hacking and coughing and occasionally crying all around me).

As you can see, I’ve had many opportunities to buy postcards, which I did. I bought postcards from The Maverick Inn in Alpine, Texas. I bought a box of 48 historic photo postcards in Regensburg. In Brussels, I even discovered a shop (Avec Plaizier) a few doors down from my hotel, which specialized in postcards. So.Many.Postcards. The owner sold international stamps, so finally I was able to buy five postcards that I actually could mail (when I eventually found a mailbox). 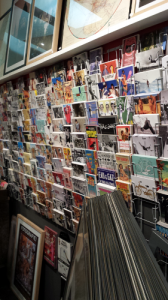 I like to think that the 125 New Year’s postcards I mailed in November and December make up for the fun-mail drought in January and February. Still, I feel like I need to catch up, so I’ll be mailing out 50 change of address announcement postcards and the 48 postcards I bought in Regensburg over the next few weeks.

Of course, the German cards will mail from North Carolina with USA stamps, but if it’s the thought that counts, I’m covered.

When I get back to Raleigh after my trip to L.A., I hope to find the box that contains my postcard stamps and get back on track. I already received my first postcard from a friend at my new pad, which was a nice way to make me feel like I’d arrived at home.

Home is good. Fun-mail is good. And don’t you forget it.