Yesterday I received the most glorious card that said: 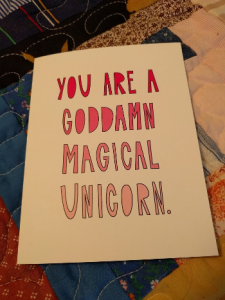 Inside the card, my friend used words like inspiring and courage, and I smiled as I read the words she’d taken time to write by hand, before addressing an envelope, licking a stamp, and sending her sentiments off into the world with the hope they’d reach me.

I revisited that card a few times today when I heard that little voice in the back of my head. “You’re not a bad person. That’s the depression talking,” I reminded myself, over and over. The voice saying I’m a horrible human and that nobody likes me has been talking to me my entire life. I mostly believed it for the first 45 years of my life. Now I believe it less, and when I do it’s because I’m tired, or sick, or I’ve been human and fucked up a little (or a lot) and am beating myself up disproportionately.

Today I felt tired. Last night, like many others before it, I dreamed about my daughter, then stayed awake thinking about her. In the dream, I searched for her, and I knew I was close to finding her, but I could never catch up. The people I encountered knew where she was, or they’d seen her, but they couldn’t—perhaps wouldn’t—tell me where she’d gone.

In the real world, I haven’t seen my daughter in 2.5 years. I have heard nothing from her in almost a year. The last time I heard from her, in April 2016, was an email in which she told me I’d never hear from her again. I won’t go into the details of what she said, meant, or might have been feeling because that’s her story to tell. But I can’t tell my story without mentioning my only child, my biggest happiness and my greatest heartache.

I read her last message as I walked onto a flight from Raleigh, North Carolina to Austin, Texas. I cried all the way to Texas, in the fucking middle seat, and then I cried a bit more on the floor in my room after I arrived.

And then, for a few hours, I thought about all the things I needed to get in order before wrapping up my life and checking the fuck out early.

Luckily, I wasn’t home alone in Raleigh that weekend. I’d flown to stay a few days with my best friend, otherwise I might not be here, typing away at a keyboard in a darkened room almost a year later. My friend and her family surrounded me with love and reminded me that, despite how it feels, I’m not alone in the world, or at least not all the time.

When running uphill or against the wind, I’ve found that taking smaller steps and looking at the ground helps keep me moving. And sometimes I stop to catch my breath when my heart hurts too much to go on. The same is true with living. This past year, I took smaller steps, I looked at the ground around me, and I caught my breath. Often my heart hurt too much to keep moving, so I crawled into bed early with a book, a cup of tea, and a cat or two.

I moved through the months, slowly, thinking about what my life looks like now. I turned 46. I miraculously stayed sober. I ran a little, lifted weights a bit, and went through the motions of living in Raleigh. I didn’t venture out of my apartment much, or meet many new people, but I kept in touch with old friends and soaked up sunshine and worked on my physical and mental health.

I improved my diet, slowly cutting back on sugar, which I’d noticed made me feel hungover the next day, and I started taking Vitamin D supplements, which my doctor prescribed after noticing that I was on the “low end of healthy”. I ate more protein. I started feeling better, at least a little.

I traveled, and I ran a marathon in Scotland in the fall and drank copious pots of tea in London. I spent 7 weeks in Australia over the winter (their summer) with a wonderful partner, and I contemplated major life changes.

I thought long and hard about who I was, who I was becoming, and who I want to be.

I came back to Raleigh in January 2017, a woman without a home. My place wasn’t Australia, it wasn’t back in Kansas, and I hadn’t allowed roots to grow in North Carolina. By February, I’d cut out sugar completely and started feeling physically better than I have my entire life. I stopped taking antidepressants for the first time in 17 years. By March, I’d joined a running club, made new friends, and ran a half-marathon. By April, I’d set a new half-marathon PR (personal record), and for the first time in all my years of running, there was someone on the race route holding up a sign with my name on it, cheering me on.

Now I’m catching my breath, because there are occasional days in which my heart still hurts too much to go on, but other days the run is exhilarating and I find that I’m hitting new PRs. I’m looking at the ground and taking smaller steps, which means I’m moving a short distance (to a new little house around the corner, in fact). Some days I’ll run a little faster, or start running from the bottom of the hill, and other days I’ll work on getting stronger or more flexible.

And every day, I’ll try to get a little better at letting go. I’ve found that I can’t grab onto the new life when I’m still trying to piece together broken bits from the old one.