I became an ordained minister in a brewery in Kansas back in 2002. On a Monday night, when the Free State Brewery had $1.50 beers (iirc), I was talking with friends inside, in the “living room” (the chairs by the stairs), and one friend mentioned that he is an ordained minister through the Universal Life Church. I told him that I’d thought about getting ordained so I could perform non-traditional weddings.

And the next thing you know, he told me I was ordained, and we drank on it. A few days later, I received a letter in the mail, in which he made it official (meaning, on paper, with a signature).

Over the years, I’ve performed about 10 weddings. I’ve used vows written by the couple, and I’ve used vows I wrote based on what the couples wanted. One couple each wrote their own vows and sent them to me privately, and it was remarkable how well their vows aligned. They have a young daughter now and are happily married, living in Kansas. Another couple had a Dias de los Muertos themed reception and a gorgeous wedding on an unseasonably cold night in Austin. They just celebrated their 7-year anniversary.

The first couple I married wanted a quick and quiet wedding in their living room, and they recently celebrated their 10-year anniversary. 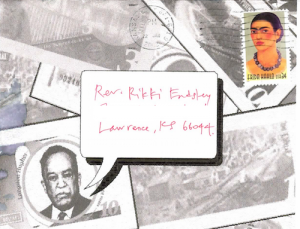 That, my friends, is the story of how I became the Reverend Rikki Endsley. I’m available for weddings.