For example, I could make a list of reasons why this blog post is so late, such as a list of things I googled in March, which includes:

That list is all related to the fact that I’ve been mostly on my back the past two months, waiting for my lower back/SI joint and knee to recover so I could start running again. And running is the best way for me to keep my head on straight and not get super depressed, especially when it’s cold and gray out. I’ve got the blues, or maybe the mean reds, or possibly a mix. February and March are hard, y’all.

By the way, remind me the next time I think I’m having a heart attack that I’m having an anxiety attack, which is a thing that happened three times in March.

Ok, so that particular list is a lame one to send a pen pal.

Here’s a better example of a real list I’ve shared with my pen pals: The growing List of Reasons I Swiped Left (i.e., NOPE) on a dating profile. That fun list includes gems such as:

So you can see how lists can be a fun letter-writing hack.

During my most recent anxiety attack, which I’ll briefly discuss in a bit more detail in a future post, I made a list of Things That Bring Me Joy to help distract myself while I brought my heart rate back down. I like to think that cats appear on the list multiple times because Rupurrt was rubbing my arm while I was writing it, but maybe I’ve just paved the way to my future as a crazy cat lady. Either scenario seems equally likely. 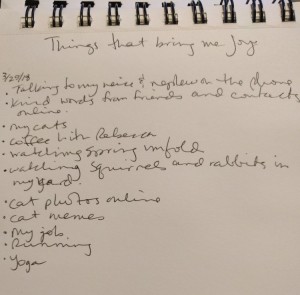